Every time I come up to the Lake District, despite having my firm favourite walks, lakes, views, cafes, restaurants and museums I make it my mission to discover somewhere new every day.  Today, it was Castlerigg Stone Circle.  This has been on my list for some time, but deep down I had this feeling that I wanted to wait for the right time and with snow forecast this morning, today seemed like the right time to go.  I was not disappointed.

Castlerigg Stone Circle, is looked after by English Heritage on land owned by the National Trust.  It was created in around 3,000BC.  It is one of the earliest surviving stone circles in the UK and perhaps one of the most dramatic.  You cannot help but stand in awe at not only the history of the circles, but the sheer drama of the scene with Helvellyn and High Seat as its backdrop as well as Skiddaw, Blencathra and Lonscale Fell.  It was bought in 1913 by Canon Hardwicke Rawnsley who was one of the founders of the National Trust and was the first site of its kind to receive a preservation order from the government.

I have visited many ancient sites all over the country, although perhaps most have been in the West Country and the north as these are the places I tend to escape too.  But out of all the sites I have been to, this for me, was the most magical.  The imposing mountains which surround the site, somehow seem to protect the stone circle – you cannot help but see why early man chose this spot as a place of importance.  There’s a sense of calm and peace, yet you can easily imagine how bleak it would be in the midst of a storm and a hard winter.

Its hard to communicate the power of the stone circle – there is something very beautiful and even romantic about this site which is probably why its one of the most visited sites in Cumbria.  I stood for sometime in the centre, slowly turning around to take in the view from every angle.  I’m not sure if I was waiting for some ancient pull from the ground, or something mystical to happen, but the peace and the power of the natural world that surrounded me was magical enough.  You get the sense that the landscape has changed very little since the time the Neolithic farmers made their way up here to create the stone circle.  The landscapes appear timeless in the Lake District and apart from the creation of roads and development of towns, I often imagine that the mountains, woodland walks, the lapping of the waters on the shoreline are exactly the same as they always have been.  Even though tourism started in the 1700’s in the Lake District, the circles are a reminder that people have been walking these mountains for a lot longer. 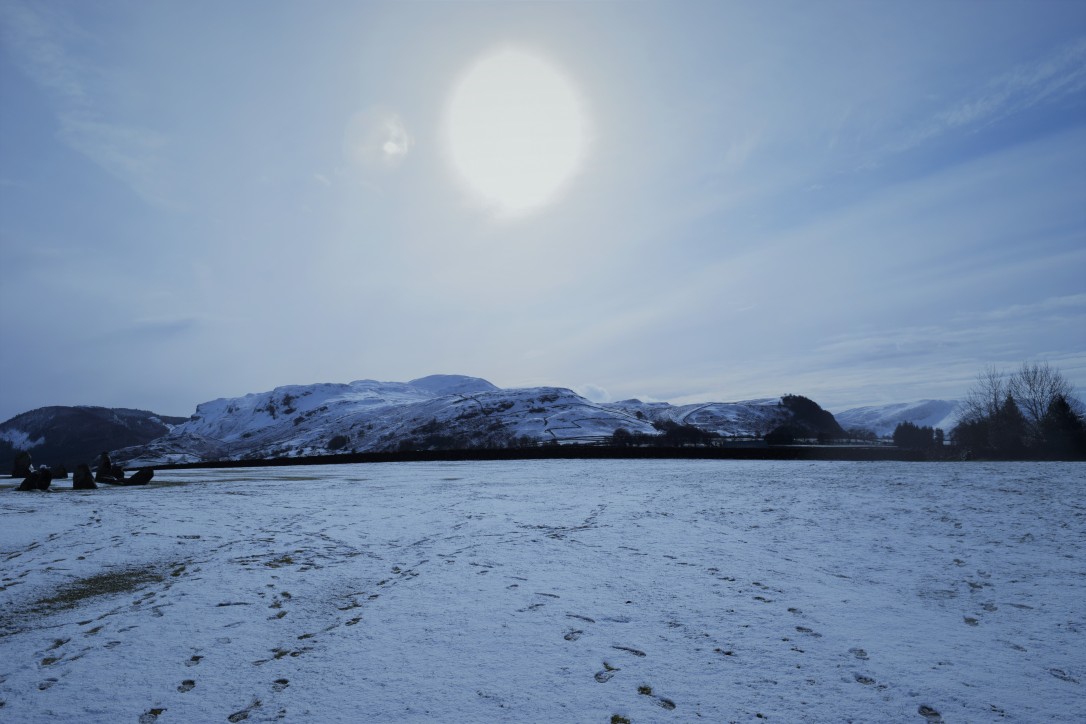 I had no idea until I delved further into their history that there were more than 300 stone circles in Great Britain, the majority of them being Bronze Age burial monuments, but this circle hails from the Neolithic period.  The area has not been greatly excavated so it is not exactly known what might lie beneath the surface unlike other circles.

Why the stones were put here is not known and I am sure for centuries people have visited here and asked the same question.  But we do know they were important to Neolithic communities.  By why they were important one can only guess – for religious purposes, or places of trade or for some other reason who knows.  But you cannot help being drawn in by the power and magic of this stone circle.

You can easily combine this with a visit to Keswick and beyond and after having spent a couple of hours here enjoying the scenery and making a snowman, we ventured to the Cumberland Pencil Museum in Keswick followed by a sumptuous afternoon tea at the Lodore Falls Hotel on the banks of Derwent Water, only a few miles south of Keswick.

Parking is limited at the site, and is at the side of the road just outside of the field where the stone circle is situated.  In high season you would probably need to go early to fight for your space amongst tourists and photographers.  But even though it’s half term, we parked easily and it was fairly quiet.  Entry is free and the site is open within reasonable daylight hours.

View all posts by emmasteponstage