The iconic image of St Michael’s Mount, just off the coast of the village of Marazion is perhaps one of the West Country’s most recognisable.

Here lies St Michael’s Mount, a majestic medieval castle and church built upon a large granite rock with far reaching views out to sea and towards Penzance.  This is perhaps one of Cornwalls most famous landmarks and a must for any Cornish visitor, whether new or old.

Now in the care of the National Trust, this fairy tale castle has a wonderful history to tell and is a great day out for all the family. Castle, harbour, sub-tropical gardens, village community, history and folklore – I first discovered St Michael’s about 20 years ago when I spent a few weeks down in the West Country during a university holiday.  I fell in love with it and have returned every year since.

The history of St Michael’s Mount dates back as far as 495AD with tales of mermaids luring seafarers onto the rocks and being rescued by an apparition of St Michael. Since then the island has been home to a community of monks, a giant, a village and the St Aubyn family.

There are two ways to access the castle – via the path which is accessible at low tide or via the small boats which run from the beach at Marazion when the tide is in and takes you into the islands harbour.  My favourite route is across the ancient causeway; you can imagine ancient pilgrims trudging across the slippery, seaweed covered cobble stones as they made their way to the church.  On a beautiful day, this way is glorious, rock pools either side of you, glistening yellow sand, and on a rainy day there is something quite haunting about the walk.  With the waves lapping either side it makes you realise the power of the sea and you can picture ancient fishermen and villagers trudging between the island and the mainland against the wind.

It is very bumpy and taking a pushchair over the path can present a challenge – I’ve done it on many occasions, but be warned!  Keep an eye on the tide as it suddenly comes across the path from each side and soon the sea covers the path leaving you little time to get back with dry feet.  On one occasions I started the walk on dry land and by the time I got back to the beach the water was up to my knees. 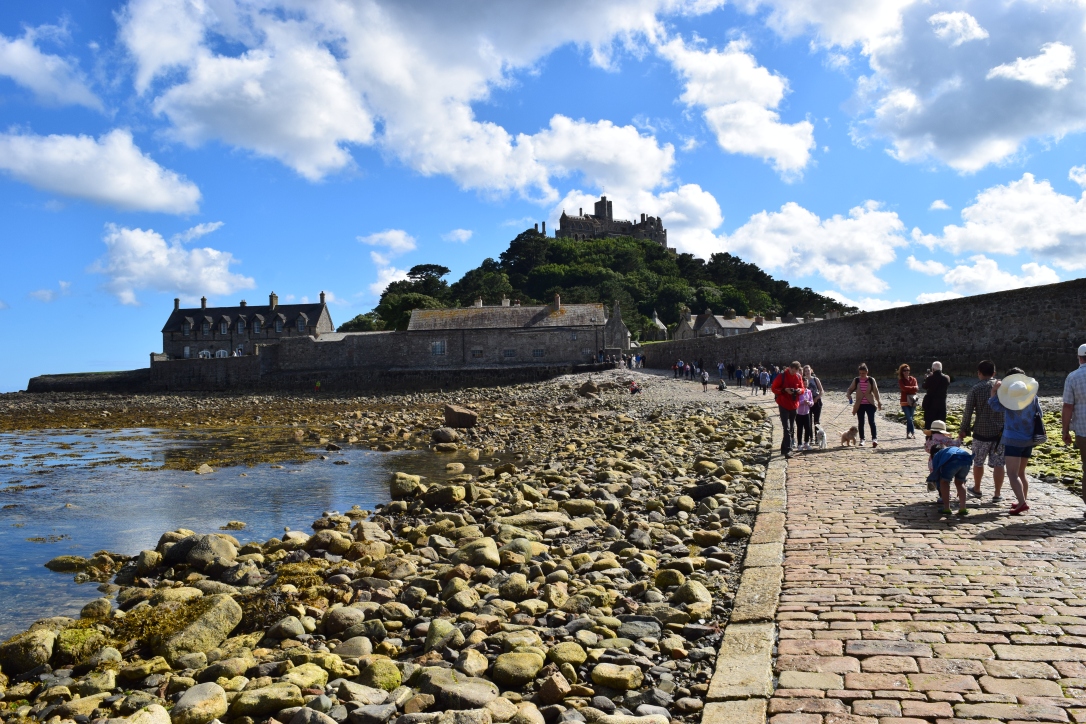 Once your bought your ticket, the path leads you pass the old dairy and up the hill, quite steeply in places to the castle at the top. One of my favourite legends concerns Cormoran the giant, who apparently fell to his death down the well.  On the way up children will love trying to find the heart of the giant and there is always a castle quiz for the inquisitive to complete. Legend has it that the island was built by the giant and he would wade across to the shore and snatch cows and sheep from nearby fields. A local boy called Jack, rowed out to the island one night while the giant slept and dug a deep hole.  When he had finished he blew his horn and awoke the giant.  The giant came running down the hill to capture the boy but fell into the hole.  The boy became known as Jack the Giant Killer and a rhyme was created locally.

Who slew the Giant Cormoran 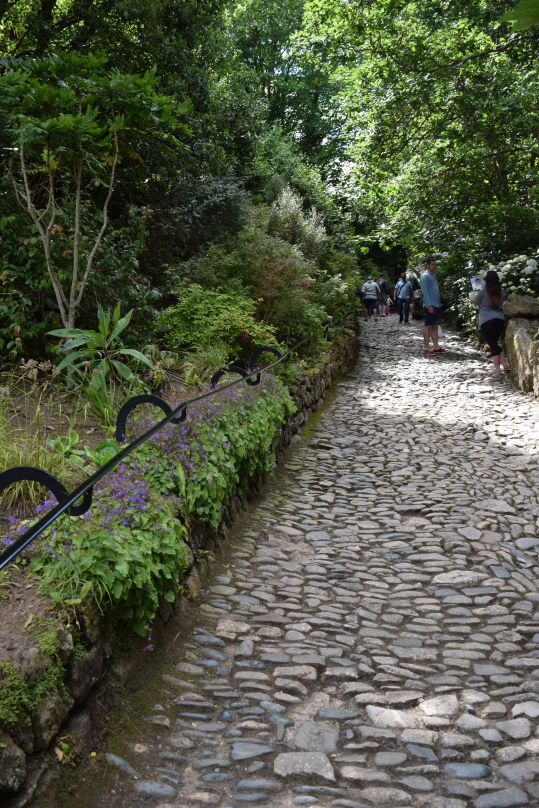 On a clear day, nothing beats the view from the top towards the coastline, it is one of my favourite views in Cornwall.

There is a good viewing area here with several old canons as well which are always popular with children!  There are many other tales and legends from the island which you can read about here. 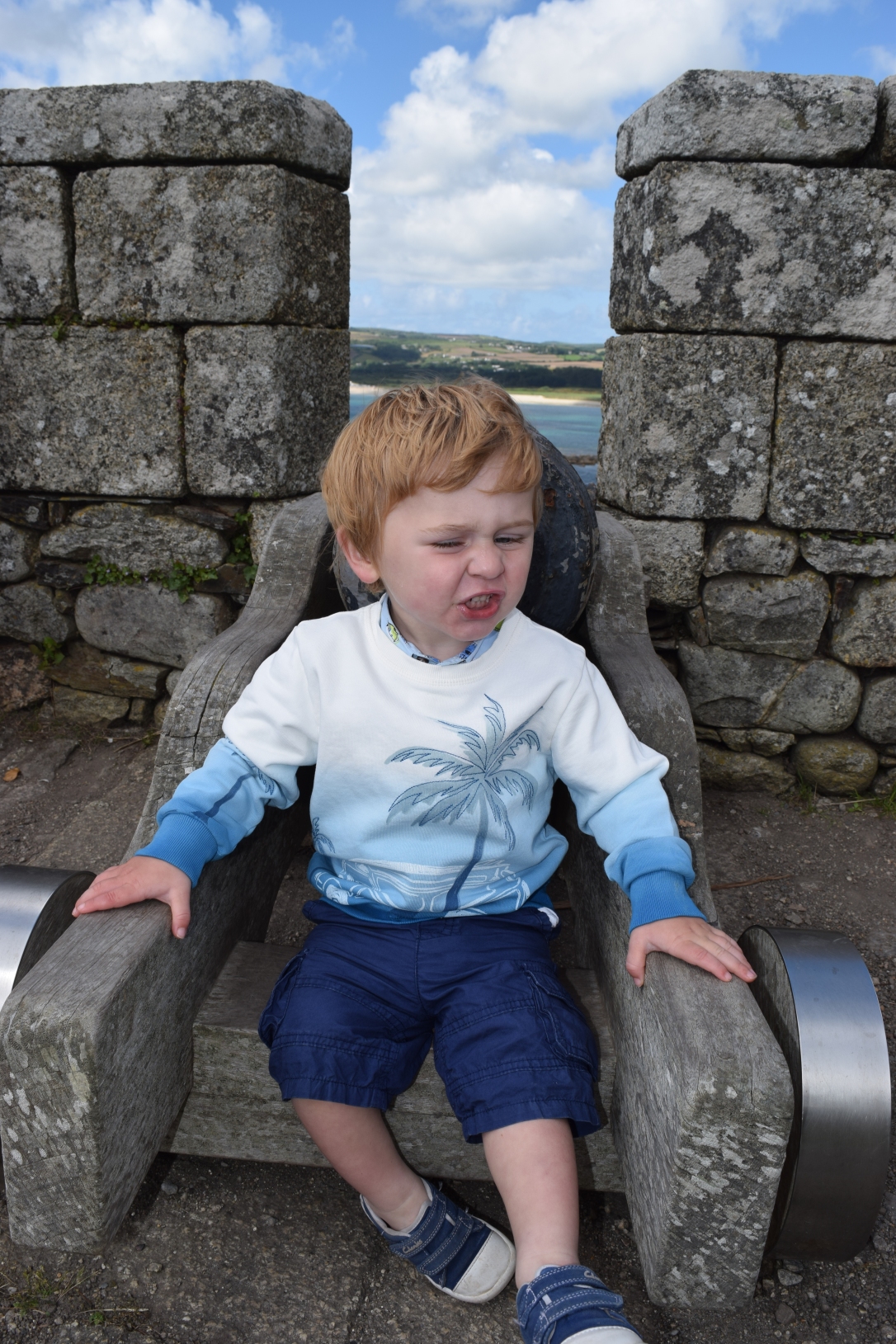 The first member of the family to move to Cornwall was Guy St Aubyn in the  middle of the 14th century and the mount has been in the family since the latter part of the seventeenth century.  It is still a family home and you get this sense as you wander around the wonderful rooms that are open to the public in the summer months.  Over the centuries the castle has had many alterations and additions and you pass through medieval sections as well as more modern Victorian areas.  There is wonderful artwork, armoury, furniture, prints, china, artefacts and heirlooms throughout and every time I notice something new or revisit old treasures.  There is particularity wonderful corridor full of old prints and as a collector of old prints I spend quite some time here.

The castle has had many guises from priory to fort, castle to family home and National Trust treasure.

Its early history revolves around the monks who sought peace and refuge here in medieval times.  Edward the Confessor founded a chapel here in 1044 and it was granted to the Benedictine Monks of Mont Saint Michael in Brittany. The first priory was established here in 1135.  There is something quite ethereal about this place, and you can see why the monks would have chosen to find their peace here and establish .  Although in rough winters, the crashing of the waves on the rocks must be frightening. The chapel dates from the 12th century and part of the original priory and services still take place here.

After the civil war in 1647, the governor. Colonel St Aubyn, was charged with keeping the peace in the surrounding neighbourhood and this was done from St Michael’s.  Its location makes it an excellent fortress and was used as such on several occasions in its long history, including during the crusades when it was held by several of John’s supporters while his brother, Richard I was in the Holy Land.

There are several rooms to visit which move you through different time periods and parts of the castles history.  You walk through medieval archways and marvel at wooden beamed ceilings, then move outside onto stone built parapets that overlook the shimmering blue seas. When you first enter, you pass through by a large, heavy medieval archway door which leads you to the entrance hall which then passes into St Johns room and onto the library which was part of the original monastic buildings and which has beautiful views out to sea. 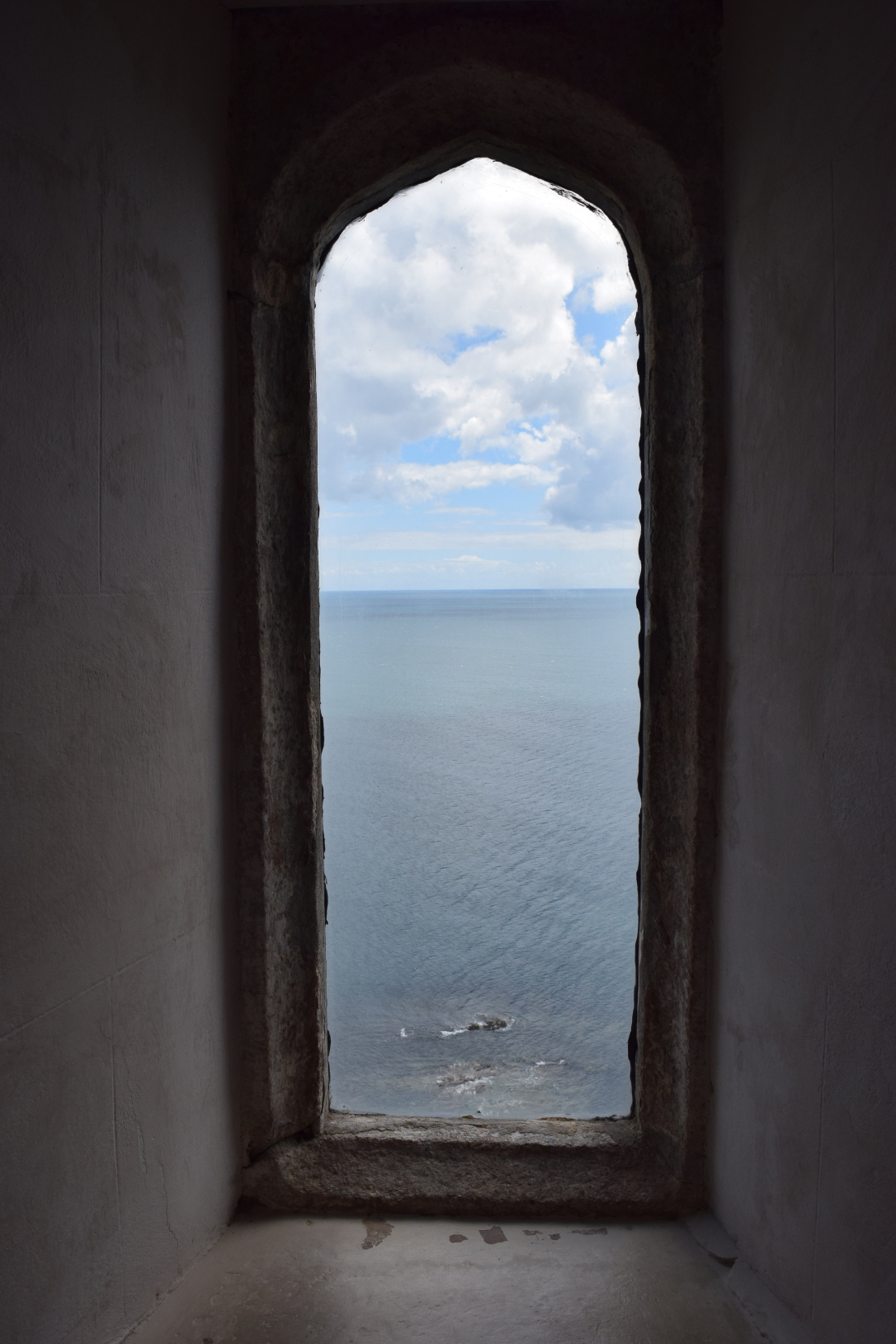 Follow the route through to the smoking room which has a wonderful array of treasures and stories.  There is a mother of pearl chest which comes from Zanzibar and which was thrown from a window of the Dukes of Parma’s house.  There is a also a date etched on one of the ones by a daughter of one of the St Aubyn’s who wanted to check the authenticity of her diamond engagement ring!

One of my favourite rooms is the blue drawing room which Queen Victoria had tea in in 1846 on an unannounced visit.

It is well worth spending some time up on the terraces and taking in the views of the surrounding coastline.  We are so lucky to have so much incredible coastline in this country, with so much history and heritage and have so much of it protected for future generations.  On a nice day, I will happily sit on the terraces for a good half hour and sock up the sunshine and look at the beauty that this county has to offer. 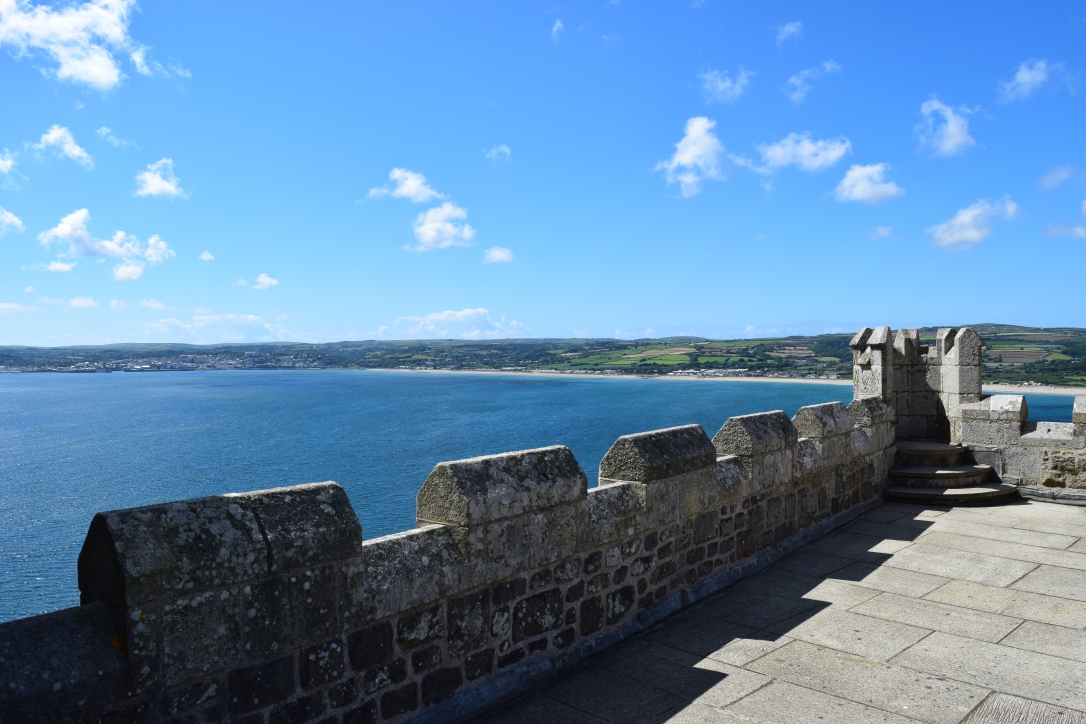 Cornwall is renowned for its sub-tropical gardens, it has its own climate down here and and rocks on St Michael’s absorb heat, and despite the salty winds and battering tides, a vast array of plants grow in the gardens and along the rocky paths.

After your trip around the castle, walk back down the hill and you can spend some time to catch your breath in the National Trust café, which always has a good range of hot and cold food and the cream tea is always worth trying.  There is also a lovely National Trust shop with a good range of the trusts usual signature items plus work from local artists, books on the local area and gifts.

But not only is the island the home to the castle but it is also home to a small bustling village where people still live and work and which was once a very busy island community.  In classical times it is thought that the island was a trading centre, mainly for the tin industry for which Cornwall is famous for.  It is even though that 2000 years ago ships might have sailed into the harbour and exported tin to the rest of Europe.  but the early 19th century the village was alive with over 300 villagers, with 53 houses and 4 streets.

There was a pub, a school, a parish policeman, a diary and village green and at one point there were so many boats that it was said that you could walk from one side of the harbour to the other just by crossing the boats!

Many of the villages buildings are still there, as is the dairy and part of the green – the old blacksmiths forge is now the Courtyard shop and the old laudrey is now the Island cafe.

The Castle, shops and cafe are open Sunday to Friday (Note they’re closed on Saturdays) and the gardens are only open on selected days so if you want to visit those then check the opening times on the St Michael’s website carefully.  Entrance is free to National Trust members with your card and prices are around £9.50 for adults and £4.50 for children.  There are family tickets available.  If you need to catch the boat when the tide is in then its currently (2017) £2 for adults and £1 for children.

And after your time on the island, you can then spend the rest of the day on the beautiful beach at Marazion.  The car parks are right beside the beach which makes them nice and easy to reach and cart all your beach stuff from and to quickly.  They cost about £3.50 to park for a day and there are 4 car parks so plenty of parking even in the height of the season. 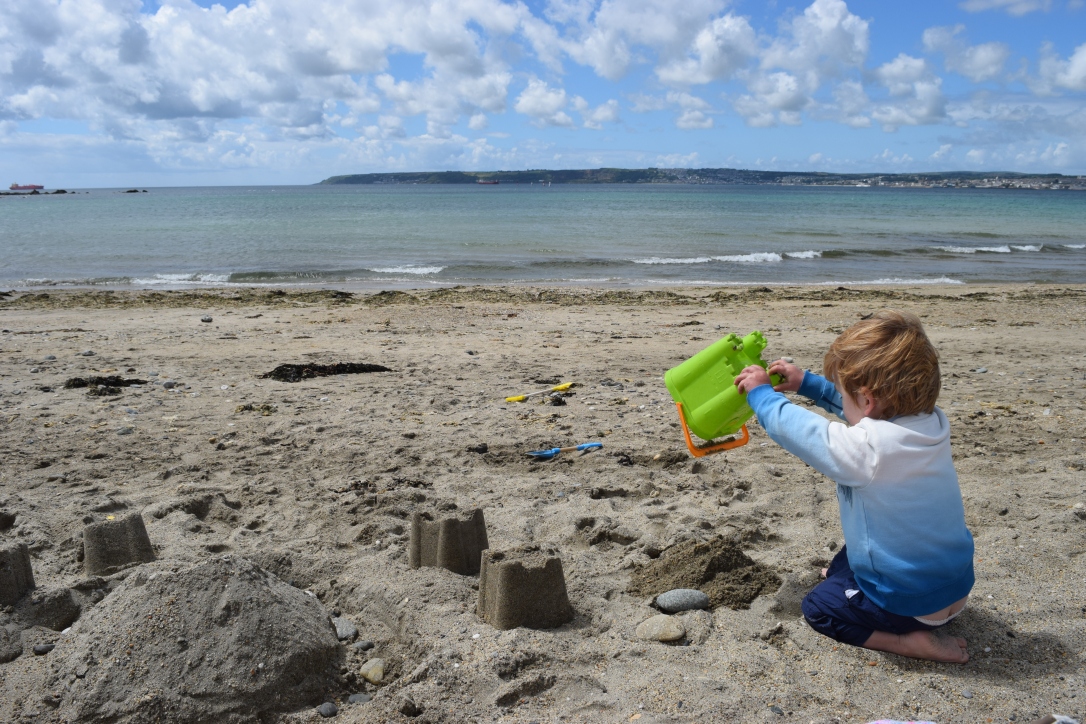 The views at sunset are beautiful and if you want to stay for dinner then I thoroughly recommend the Godolphin Arms just a short walk in the village and which overlooks the mount.

View all posts by emmasteponstage